Withdrawal is the 15th scene in Hotline Miami 2: Wrong Number, taking place on June 3rd, 1989 in Miami. In this scene, the player takes control of Jake. It is the second and final scene to feature Jake as a playable character.

Jake receives another call, but before going to his mission he goes to a 50 Blessings center, where he encounters an executive. He explains the calls and suggests that 50 Blessings set up a similar operation, also pointing out that many members have a prior military experience. When the Manager becomes visibly uncomfortable with the topic, Jake realizes that 50 Blessings are already behind the calls, and happily goes off to complete his next assignment, promising not to share his discovery with anybody.

The level is composed of 3 stages. The first two floors feature unstable meth labs, which violently explode after being shot. The labs also contain Acid.

It doesn't matter if Jake dies in the first and second floor, but in the third one dying or surviving leads to two different outcomes.

[Jake is standing in his apartment. If he took the money, there's a new pinball machine in the kitchen. He answers the phone]

Phone: This is Mary from the Daycare Center on NW 159th St. We're having a parent-teacher meeting tonight at seven.

[Jake takes his car, which is replaced with a monster truck if he took the money, to the 50 Blessings bunker HQ. He talks to the Manager.]

Manager: Why hello there. We're just about to close up here... Is there anything I can help you with?

Manager: Is that so? I'm glad to hear that! Thank you for your support.

Jake: Look, I've got this plan. I know it sounds a little crazy... but just think about it for a little while, OK? I think I might be on to something big here.

Manager: Alright! Let's hear this plan of yours. Just make it quick, I really need to be on my way.

Jake: Alright, so I've been getting these strange phone calls...

[The Manager's smile is gone.]

Manager: Strange phone calls? I wouldn't know anything about that.

Jake: Look, just hear me out, OK? ... Like I was saying, these phone calls are telling me to do stuff. They sound like they're some kind of misplaced calls, but... They're not. And if you don't do what they say... Well, let's say you don't want to disobey them... They mean business, if you know what I mean.

Manager: I see. And what do you think this has to do with our organization?

Jake: I dunno. I was thinking... What if we set up a similar operation, except... Like, we go after the Russians, free America of our oppressors, y'know! I mean, you have all these members and all the resources. Many of us have military experience, we'd wipe 'em out! We could start a civil movement! Free ourselves!

Manager: I'm not sure I follow. We're a peaceful organization... We'd never force anyone to do something they don't want to. I'm not sure what you're accusing us of.

Jake: Man, you're not listening! I'm not accusing you of any-

Manager: Look here, sir. We're closed, OK? ... If you don't mind I would really like for you to leave now.

Jake: Can't talk about it here, eh? Gotcha! Don't worry, I'll keep your secret safe! You can count on me, brother! We're both patriots, right? I'll just go now, I have something important to do... If you know what I'm saying. Heh! ...

[If Jake survives the third floor, he exits the building to find the Manager waiting for him in a Phone Hom van. The Manager rolls down the window and starts talking]

Manager: Oh, good. You're alright. Look, we need to talk... There's a safe place not far from here, how about I take you there?

Manager: We have to get out of here now. The cops will be here any minute.

[Jake is on the floor in the backroom of Downtown Relaxation from Hot & Heavy. Petrov and the VIP Guard interrogate him.]

VIP Guard: He's not going to talk, is he?

[Petrov aims his gun at Jake]

Petrov: Got any last words, asshole?

[Jake spits blood, and Petrov shoots him through the head.]

[Jake is seated in front of a computer with several floppy disks, the Manager stands in front of him.]

Manager: Alright, looks like this is gonna be a long night... How about I go get us some coffee? ...

Jake: Sounds good to me, sir! When you get back... I've got some ideas I'd like to share with you! I've been thinking long and hard about all this, I'm...

Manager: I'll be right back, OK? Got a pot of coffee in the other room.

[The Manager leaves, and Jake can pocket the floppy.]

[The Manager returns with a pistol.]

Jake: What's with the gun, sir? Are they after us?

[The Manager shoots Jake through the head, causing Jake's brains to fall out on his lap.]

Withdrawal from the scene selection screen. 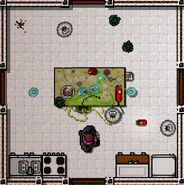 The meth lab seen on the first floor. 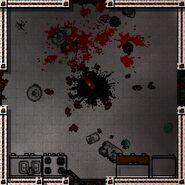 The blown up meth lab on the first floor. 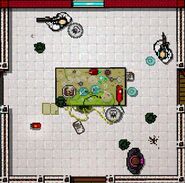 The meth lab seen on the second floor. 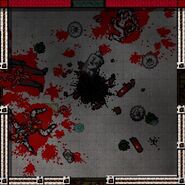 The blown up meth lab on the second floor.

Jake is wounded and dragged away by a Mobster.

A wounded Jake being interrogated by Petrov and the VIP Guard.

Jake is shot in the head by Petrov.

Jake sits at a desk moments before being shot by the Manager.

Jake is shot in the head by the Manager.
Community content is available under CC-BY-SA unless otherwise noted.
Advertisement