Dead (beaten up and immolated)

The Van Driver, or Molotov Guy, is a character and an antagonist in Hotline Miami. He serves as the boss enemy of Part Three: Visitations, where he is encountered at the end of Chapter 11, Deadline.

He drives through the main doors with his van, some mobsters and thugs come out of the vehicle and start to attack Jacket while the van's driver throws Molotov cocktails at the masked murderer.

After killing all the thugs and mobsters from the van, the driver will surrender. Jacket beats him to death with his bare hands - smashing his head against the floor and breaking a number of his bones - and then lights his corpse on fire. This execution has bursts of dream static, and the driver noticeably looks like a nonsensical blend of Richter and Biker, hinting that Jacket didn't really brutally kill the driver and is just dreaming a cathartic revenge on those characters he failed to kill. 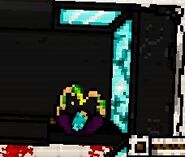 The Van Driver as he appears in-game. 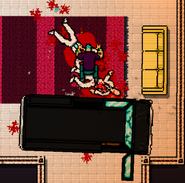 The Van Driver surrendering to Jacket.

Jacket bashes the Van Driver's head into the ground. 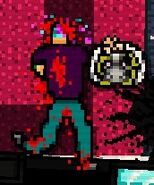 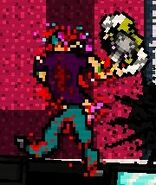 Jacket prepares to set the Van Driver on fire. 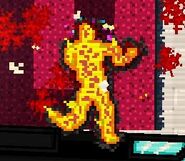