In Hotline Miami, Tony gives Jacket "Fists of Fury". This means faster executions and killing blows from fists, which can also kill dogs.

In Hotline Miami 2, a damaged Tony mask returns but is limited to use by one of the Fans, who is actually named Tony. It has an exploded and bloody look. The effect of the mask is the same as in Hotline Miami, but comes with a penalty of no weapon pickups during the level it's used in. It can be also used to execute thugs and dogs. Killing lunging dogs results in an elongated execution.

In the beta for Hotline Miami 2's Level Editor, Jacket's Tony mask lacks faster executions, but retains the ability to use guns. Dog kills never give an elongated execution, and thugs are no longer executable. 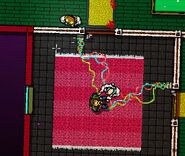 A man wearing the Tony Mask is captured and tied to explosives. 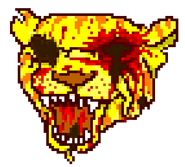 The Fans' Tony
Add a photo to this gallery
Retrieved from "https://hotlinemiami.fandom.com/wiki/Tony_Mask?oldid=41325"
Community content is available under CC-BY-SA unless otherwise noted.