Blonde (Brown in the Sequel)

Brown (Black in the sequel.)

The Janitors, also know as Dennis and Jonatan are two mysterious men linked to the phone calls received by Jacket and other operators of the nationalist group 50 Blessings. They are the main antagonists of Hotline Miami and return as secondary antagonists in Hotline Miami 2: Wrong Number.

The Janitors are based on Dennis Wedin and Jonatan Soderström, the two creators of the game.

In Hotline Miami, both of them wear green suits and caps as their uniforms, while Dennis has blonde hair of medium length, blue eyes, and a piercing in his nose. Jonatan has short brown hair, blue eyes, a mustache and a goatee, and appears to also have stubble.

In Hotline Miami 2, they both no longer wear their uniforms, but civil clothing, and have both grown their beards (especially Dennis, who now has a full beard and dyed brown hair), a reference to Weddin and Soderström whose looks changed since the creation of the first game. In Release, Dennis is carrying a large bag, and Jonatan has a backpack.

In both games, they have suspicious grins on their faces (perhaps implying knowledge about the outcome of the series) which only cease after Biker correctly guesses their Computers' password.

The Janitors like to call themselves American patriots. They are contributing to 50 Blessings' movement of terrorism against the Russian Mafia by forcing people to commit murders. These murders are ordered via cryptic phone calls. While the patriotic motives of the Janitors can be debated as justified or not, the Janitors are clearly immoral and sociopathic. They show absolutely no remorse for pushing innocent people like Richter to commit murders. Furthermore, they are completely ungrateful to their agents, as they order most of them to be killed after they stop being useful.

The Janitors are also representations of the two creators of the games, some of their dialogue is actually the developers addressing the player. However, this type of dialogue seems to have a double meaning, as the Janitors and the developers are clearly distinct entities.

The Janitors are first introduced on May 13th, 1989, overseeing Jacket's assassination of mob affiliated pro-RAC politicians in Clean Hit after Biker apparently rejected the job. Dennis is seen on the first floor of Jacket's building, presumably spying him, and Jonatan is seen inside of the targeted building, also presumed to be spying, which would explain how they become quickly aware about Biker declining the mission.

They are revealed later to Biker on May 24th during Resolution to be the men leaving the mysterious phone calls on the answering machines of 50 Blessings' masked operators. They are in fact members of the nationalist group, which aims at taking out Russian organized crime out of Miami in hopes of playing up Americans' distaste for Russians and breaking the Russo-American coalition. They will simply laugh at his ignorance if the puzzle was not completed and their computer not accessed, claiming to have organized the slaughters for their own fun. However if their password was cracked, Biker discovers their plan before confronting them, surprising them both. The Janitors will then state that they are just the "tip of the iceberg" and that there are 50 Blessings operations all over the United States. When the dialogue is over, their fate is left in Biker's hands as he can choose to slaughter them or simply leave for good. Regardless, their nation wide scope and connections cause Biker to flee Miami to angle his next move from the desert.

The Janitors are the ones leaving messages on Jake and Richter's answering machines, although neither of them discover this.

Regardless of their fate in the first game, they will be alive, implying that Biker sparing them is the canon choice.

The Janitors reappear a year later in Release, where they visit Richter in jail who doesn't remember them. They say that they came to tie loose ends and wanted to see him one last time, and leave before Richter is confronted by a murderous prisoner (bearing a "50" tattoo) and eventually a riot. They have also changed their look by dyeing their hair and growing their beards, and wear regular clothes instead of their janitor suits.

The Janitors' dialogue is a continued fourth wall break about the nature of the sequel, explaining that they're "tying up some loose ends" and that it "seems like it wasn't really necessary" and that "we didn't expect you to [understand]" but that "you'll figure it out."

Their fate remains unclear, but they are likely alive, being aware of the ensuing nuclear conflict between the United States and Russia. Whether or not they were killed in one of the several nuclear blasts that occurred is unknown. 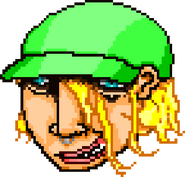 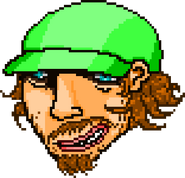 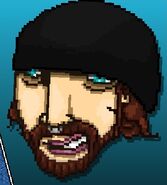 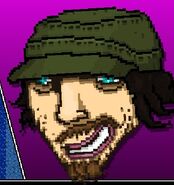 Jonatan Söderström in Hotline Miami 2
Add a photo to this gallery
Retrieved from "https://hotlinemiami.fandom.com/wiki/The_Janitors?oldid=40778"
Community content is available under CC-BY-SA unless otherwise noted.