Enforcer serving under the Russian Mafia (1991)

The Henchman is a Russian mobster and a playable character in Hotline Miami 2: Wrong Number. He seems to have a personal friendship with the Son, the current boss of the Russian Mafia. He has reservations about The Son's newly started drug war with the Colombians, and wants out of the game.

His community assets can be found here.

The Henchman sports what appears to be the same tan as the Russian troops Beard fights, possibly indicating he was part of the 1985 occupation.

On November 18th, 1991, the Son informs the Henchman of his plans to start a war with the Colombians. The Henchman questions whether that's a good idea given their small numbers, and the Son replies that the Colombians are actively growing in influence and will never again be as weak as they are right now. After assaulting a local gang meeting and claiming the strip club for the Russians, the Henchman is noticeably not celebrating, and says he's going home to his girlfriend, Mary. The Son comments that she's done a number on Henchman's personality, and that a real man doesn't need to rely on women to live his life, concluding that "The minute you get attached to anyone, you know you're fucked." He also comments that Mary's too good for him and will come to her senses one day. However, he backs off and let's him go, giving him some money to get his girl something nice.

On November 21st, Henchman finally breaks his desire to get out of the business to the Son, saying that he's soft and that he feels he won't last much longer, and that he's been having "dreams." The Son immediately let's him out but gives him one last job: clearing out a Gang-controlled chop shop (the same one Andy works at), which has recently defected to the Colombians. As a parting gift the Son gives Henchman a free sample of the new product -- a psychoactive drug in purple and green pill form (similar to both the color of the Father's house and the alien plants in Hawaii) -- to "spice up this new boring lifestyle [he's] chosen."

Henchman proceeds to his Fiat past the Son's more expensive Firebird to drive to the chop shop. The entrance to the chop shop noticeably has "Die!" spray tagged onto the old husk of a car, paralleling Henchman's age and fear of death. The young "hoodlums" running it have set up skateboard ramps near the entrance, and he has the option of using a skateboard to beat them to death. The chop shop is naturally full of expensive cars all out of Henchman's price range and reach. He finishes off a worker loading a Colombian payment into a blue bag, resembling the money bag from Drive. Henchman heads out and bumps into Andy, who he decides to spare.

He heads home to Mary, who is watching TV and has made dinner, which he was late for and is now in the fridge. He says he's "out," which worries Mary, and heads upstairs to bed. Henchman's house is comfortable but not affluent. His downstairs has a pool room, and his upstairs features trophies, a few cases of expensive weapons, exercise equipment, and a second living room with a fat cat asleep on the sofa (a likely joke about his feeling soft and having dreams). A newspaper is open to a story about a Russian family of five being burned alive in a recent arson, and that this is part of a huge wave of anti-Russian hate crimes. He kicks the money bag across his tiger pelt rug and under his bed and goes to sleep.

In his dreams, he has bought a much more expensive car which he drives alone, noticeably without Mary. He listens to the radio, which is celebrating fantastic weather and says the station will later debut a new single from Perturbator (a joke about how Sexualizer plays over the next scene). It mentions that the next song is by "Mitch-" and is cut off by an emergency weather report indicating a tropical storm approaching (a joke about artist Mitch Murder). The road turns to ruins and Richard appears, telling him that without directions he'll likely end up going in circles, and that he's headed for a dead end and knows that. He ends the dream by asking Henchman if he forgot to bring his girlfriend.

On November 22nd, Henchman wakes up to find the money bag and his car both gone, with a note from Mary saying he'd do the same (which is probably true if his dream is an indication). Dejected that the Son was right, he goes to a Russian affiliated drug den and takes all of the Son's pills. He tries to call either Mary or the Son but is too high to dial the right number. The Fans' attack van screeches up to the building and they proceed to kill everyone inside, including the incapacitated Henchman (likely because Henchman is associated with the Russian mob, and because of his attack on Andy's chop shop; may be in part due to him being a Russian and the Fans being prior military). The drugs having numbed his pain, Henchman talks the entire time the Fans kill him: asking if he needs to go to a hospital, saying he wants to go to the jungle, asking them to call Mary, and finally saying that he just wants to go home. Corey delivers several clumsy blows to his head, killing him, and Ash pockets his cell phone. This serves as the game's first transition to the Hawaiian Conflict.

The Henchman begins a level with a silenced heavy pistol; the first screen of No Mercy is actively set up as to be completable entirely with it and only it as long as the player misses no shots. The Henchman also has a unique "starting weapon" in the form of a light green skateboard immediately by the entrance to his level, which has a moderate swing and execution speed. Weapons aside, he plays almost identically to a default Jacket. He does not wear masks and is very straight-forward in his proceedings.

This is a compiled list of how many murders The Henchman has committed in the series:

Overall, The Henchman has committed 43 murders.

The Henchman wielding the Silenced Heavy Pistol he starts with. 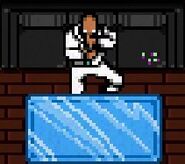 The Henchman taking drugs in Execution. 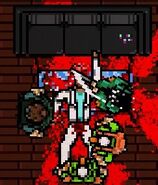 The Henchman's death.
Add a photo to this gallery
Retrieved from "https://hotlinemiami.fandom.com/wiki/The_Henchman?oldid=40099"
Community content is available under CC-BY-SA unless otherwise noted.