The Bodyguard, also known as the Ninja Girl, is a character and a boss in Hotline Miami and a posthumous minor character in Hotline Miami 2: Wrong Number. She served as The Father's primary bodyguard during 1989 and had a vague relationship with The Son, who seems to keep her smashed sunglasses and katana in 1991. She is the penultimate boss of Hotline Miami.

The Bodyguard is the second boss fought in Chapter 15, Showdown, with the first boss fight being the two panthers. She uses throwing knives at range and an Iaijutsu strike with her katana at close quarters. Both attacks will instantly kill Jacket, and are extremely difficult to dodge.

After Jacket kills the panthers, the Bodyguard taunts him and the fight will commence. The only weapon of choice is the trophy that Jacket still holds firmly, fresh with panther blood. Melee attacks with the trophy have no effect on her and will result in instant death.

To defeat the Bodyguard, the player must knock her down by throwing the trophy and then jump on top for an execution move. The best way to perform this maneuver is right after her dialog finishes, as she will run straight towards Jacket. If the player is outside of the battle arena after killing the panthers, she will throw a knife, resulting in immediate death. A common strategy is to lock on to her while hiding from the panthers. Defeat the panthers, step into sight and throw the trophy- make sure you're standing still when you throw it. While the gameplay is paused you can still rotate your character if you pay attention to where you are facing, allowing you to easily target her before she has a chance to move.

Once she has been hit by the trophy, Jacket can walk towards her and perform an execution. During this execution, however, she will push Jacket off of her and start crawling away. Wait for her to crawl next to or almost behind The Father. Then, finish her, target the boss, and rapidly throw the knives that she's dropped at the boss.

In Hotline Miami 2: Wrong Number, she appears at the end of Blood Money, alongside The Father and The Grandfather. She alongside the two are encountered by The Son as a hallucination, showing that he sees the Bodyguard as a part of his family. After The Son has a conversation with his father, the Bodyguard will grab a Richard mask and pull it over The Grandfather's head, which summons Richard to converse with The Son.

Unlike The Father, the Bodyguard and the Grandfather do not speak a single line of dialogue during their brief reappearance. 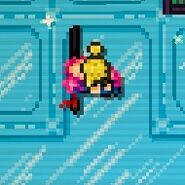 The Bodyguard initiating her fight with Jacket.

The Bodyguard attacking with her katana. 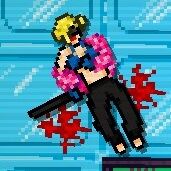 The Bodyguard after being knocked over. 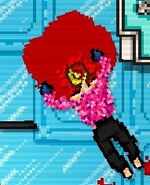 The Son encounters a hallucination of The Father, The Bodyguard and The Grandfather.

Community content is available under CC-BY-SA unless otherwise noted.