Yes
Teenagers are minor enemies in Hotline Miami 2: Wrong Number. They are encountered in the tutorial level, Midnight Animal, where they are used to re-introduce and demonstrate the basics of the combat system in the Hotline Miami series.

The Teenagers are also the first shown victims of the Pig Butcher (portrayed by Martin Brown) in the slasher film, Midnight Animal.

There are only six different teenagers in the game, one of which is played by Rachael Ward. They are shown in Midnight Animal socializing in a trashed two story house in the apparent aftermath of a party. Several bongs and alcohol bottles are scattered about, and the unoccupied kitchen has a lit oven burner and is full of smoke. A comparatively well-kept teen bedroom is upstairs near the master bedroom, which itself is being used by two kissing teens.

Almost all of the teenagers (excluding two in particular) are completely harmless and cannot kill the player, but almost all of them are required to be taken out. Each teenager shares a different characteristic between each other in order to show off the different instructions given out by Rouven Blankenfeld in order to get the player used to the combat system, whether it would be executing, attacking up close or shooting the teenagers.

There are six different variants of teenagers encountered in the tutorial level:

First Teenager: The first teenager is seen directly at the entrance of the apartment, smoking right by the door. The player can knock this teenager down immediately by barging into the door and can be killed with an execution. The teenager will never get back up upon being knocked down.

Second Teenager: The second teenager is seen dancing alongside the third teenager. He is one of the only two teenagers who will attack the player, and is the only teenager that can actually kill the player.

Third Teenager: The third teenager is seen dancing alongside the second teenager. After the second teenager is killed and upon noticing the player, he will run to the backdoor beside him and attempt to frantically tug it open in order to escape. If he is knocked over by the player and gets back up, he will simply back away from Martin until he is killed. He can easily be dispatched with a melee attack or an execution.

Fourth Teenager: The fourth teenager is the first teenager seen on the second and final floor of the tutorial level, where he is leaning against a wall outside of a separate room, where he can briefly be seen swaying back and forward, possibly drunk. He will not react to the player at all. If the player follows the instructions listed on the bottom of the screen, the player is intended to use a double barrel hanging beside a wall near the stairs and shoot the teenager dead via lock-on.

He cannot be knocked over, as simply throwing a weapon at him or punching him normally will kill him. Therefore, he is the only teenager that cannot be executed. However, he can still be killed with melee weapons, such as the baseball bat and hammer found earlier in the level. Killing this teenager is completely optional.

Fifth Teenager: The fifth teenager is seen in the main bedroom making out with Rachael Ward. He is one of the only two teenagers who will attack the player, but he cannot kill the player in any way.

Upon noticing the player, he will charge towards the player and will attack Martin when making contact with him. He will punch Martin three times before backing away from a completely unphased Martin. If this teenager is knocked over and gets back up again, he will repeat the process over again. He can be killed with a melee weapon, gunfire or an execution.

Rachael Ward: Rachael is the final teenager in the level, and is shown making out with the fifth teenager, who is possibly her boyfriend.

When the fifth teenager notices the player, Rachael will attempt to cover herself up with her hands, despite not being fully naked. If Martin gets close to her, Rachael will shake her head and hold her hand in front of her as if to keep him away. She can be wounded, but not killed, with a simple punch, melee weapon or gunfire. She will try to crawl away from Martin, but stops, where Martin will rape her before Rouven cuts the scene.

The first teenager is shown to be a tanned man wearing a green baseball cap backwards, a pink jacket with purple sleeves and a purple collar, jeans and white trainers. He is shown to be a chain smoker, as he is stood near the entrance smoking, which is littered with burnt-out cigarettes.

The second teenager is a bald, white man wearing a full blue and white tracksuit and green and purple trainers.

The third teenager is a dark skinned man with dark brown hair, and wears an aqua blue shirt with green overalls, white shorts and blue trainers.

The fourth teenager is a white man with neatly parted brown hair, and wears glasses, a dirty yellow short-sleeved jacket with possibly a brown shirt underneath, a light brown pair of trousers with one side torn slightly at kneecap level and a pair of brown shoes.

The fifth teenager is a white, muscular man with dirty blonde hair similar to that of Jacket's hairstyle. He is completely topless, and is only seen wearing white boxers.

Rachael Ward is a white girl with bright blonde hair tied up into a ponytail. She is shown in a red bra and red underwear.

The first teenager after being knocked down.

Martin Brown executes the first teenager with a Baseball Bat.

Martin Brown executes the first teenager with a Hammer.

The second and third teenagers dancing.

The second teenager after being knocked down.

Martin Brown executes the second teenager with a Baseball Bat.

Martin Brown executes the second teenager with a Hammer.

The third teenager after being knocked down. 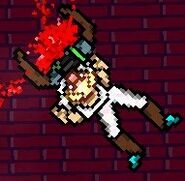 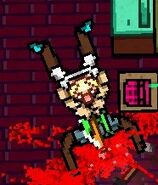 Martin Brown executes the third teenager with a Baseball Bat.

Martin Brown executes the third teenager with a Hammer. 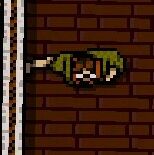 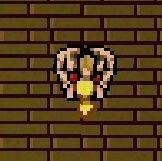 Rachael Ward making out with the fifth teenager.

The fifth teenager after being knocked down. 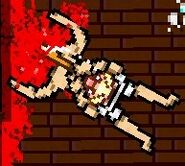 Martin Brown executes the fifth teenager with a Baseball Bat.

Martin Brown executes the fifth teenager with a Hammer. 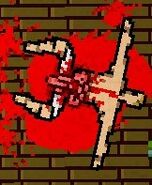