SWAT officer (in the movie)

The SWAT Chief is character and an antagonist featured in Hotline Miami 2: Wrong Number, where he is a minor boss that appears in Act 1, scene 4, Final Cut.

His facial sprite shows up again in Death Wish, used on a real SWAT Chief furious that Pardo has stolen his operation for his own personal fame. There are multiple theories that could explain this.

The SWAT Chief serves as the main antagonist of Martin Brown's storyline.

Upon entering the final area of the level, he will be seen speaking to Rachael Ward with several cops inside guarding her. He will lock the door and say "Stay in here and you'll be safe! I'm gonna go see what's going on. Don't open the door until I get back! No matter what!"

Upon finishing the dialogue, the SWAT Chief will begin to relentlessly patrol the entire area. His movement pattern consists of moving quickly from the main corridors parallel to each other, stopping at several corners and peeking out with his dual-wielded magnums pointed around the corner. Upon reaching the end of his patrolling area, he will perform a commando roll (similar to Corey's signature roll) into the next corridor and repeat his patrol pattern.

Upon spotting Martin Brown, he will pursue him whilst rapidly shooting at him with his magnums which proves to be very deadly, being capable of killing the player quickly if they're not fast enough to find cover. The SWAT Chief will not stop chasing after the player until he is dead.

The way to kill the SWAT Chief is by knocking him down with either gunfire or hitting him with a melee weapon. Upon being knocked over, Martin can then finish the now defenseless police officer with a grisly ground-execution, in which Martin rips his head off and pulls his spine out with his bare hands. It is advised to clear any enemies nearby before performing this execution, as it takes a long time to proceed, leaving the player vulnerable. Once the SWAT Chief is killed, he will drop the keys to the room where Rachael is being guarded, which will gain the player access to beating the level until every enemy is killed. However, the player won't be able to pick up his magnums once he is killed.

If the player knocks him down but lets him wake up, the SWAT Chief will stop patrolling and stay idle where he has been knocked down, he will also react to gunfire on idle form.

It is in fact completely optional to kill him. If the Butcher kills everyone but the SWAT Chief, he will be able to enter the interrogation room without keys.

The SWAT Chief appears in the undated level Final Cut, after the police was alerted of the Pig Butcher' s evasion and assault on the police, he decides to lock Rachael Ward to protect her, and he starts to patrol in an attempt to hunt the Butcher.

This won't end well for him, as the Butcher will attack him in surprise and next ripping off his spine out of his head, and then taking the keys to access the girl again.

An identical S.W.A.T Chief appears in the outro to Death Wish, while Midnight Animal is supposed to be a movie according to Martin Brown, this Chief is a real one. It could be a simple sprite recycle however there are others possible explanations :

The SWAT Chief peeks around a corner. 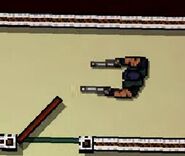 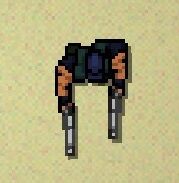 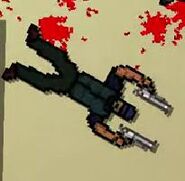 The SWAT Chief knocked over. 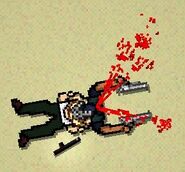 The unarmed SWAT Chief as seen in Death Wish.
Community content is available under CC-BY-SA unless otherwise noted.
Advertisement