Sir are you alright?

The SWAT Team are special enemies in Hotline Miami and minor characters in Hotline Miami 2: Wrong Number. They are only found on Chapter 9 (Crackdown) as enemies. They appear at the end of the level and cannot be hurt by the player in any way, save for knocking them down. They act much the same as regular policemen but cannot be killed.

SWAT officers only use machine guns.

The SWAT Team return in Hotline Miami 2: Wrong Number as minor characters rather than enemies, in which they appear in the outro of Death Wish and at the very end of Release. However, the game features a minor boss enemy in Final Cut, known as the SWAT Chief that can be killed with a unique execution by Martin Brown. The SWAT Team have changed aesthetically, in which their armour is now a navy-blue colour rather than an aqua blue in the first game.

SWAT being pushed back from a door. You can also put them in this state by shooting them. 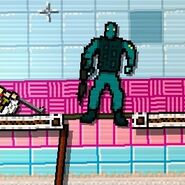 SWAT being knocked to the ground due to melee. 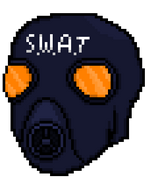