The Soviet Military (known as Soldiers in the Level Editor) is an enemy faction that appears in Hotline Miami 2: Wrong Number and are featured in Beard's three levels. They are part of a local Soviet garrison after the USSR invaded Hawaii in an unspecified conventional war against the US. (Soviet flags are seen hanging from the buildings, they are painted on vehicles as well as they are sewn on the soldier's sleeves and there is written USSR on ammo crates).

Soldier: The most common type of Soviet Soldier. These enemies function the same as Mobsters and any other enemy that functions like them. They are always armed with either Machetes or Kalashnikovs. Some Soldiers can also be found hiding underneath ponchos or behind cover.

Heavy: These enemies are larger, broader and fatter Soviet Soldiers, and are special variants of the Thug enemy subtype. They are immune to melee weapons and can only be killed with firearms. Unlike Thugs however, they can be seen wielding either combat knives or MP5s. The Heavies with combat knives will charge after the player just like regular Thugs, while the Heavies wielding MP5s will pause in place and open fire on the player. The Heavies with MP5s are somewhat similar to the Police Chief from the first Hotline Miami except they only use one MP5 and can move.

Dodger: These are special enemies exclusive to Hard Mode only and dual wield 9mm pistols. They dodge gunfire and even the flames ejected by the Flamethrower, an ability that is also shared with other Dodgers. They can only be dispatched with Beard's combat knife. They only ever appear in the Hard Mode version of Ambush.

Dog: Only accessible through the Level Editor. They function exactly the same as regular dogs. 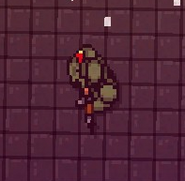 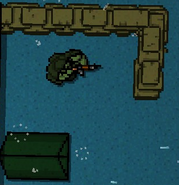 A Soldier wearing a poncho, guarding his outpost.

A Soldier hiding behind cover. 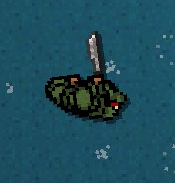 A Soldier wielding a machete.

A patrolling Heavy, wielding a knife.

A patrolling Heavy, wielding an MP5. 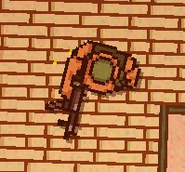 A Heavy opening fire on the player with an MP5. 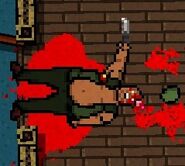 A Heavy shot dead with the Sniper Rifle. 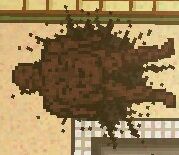 A Heavy's charred corpse caused by the Flamethrower. 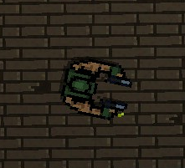 A Soldier Dodger ducking down and dodging gunfire.