"I'm not your fucking girlfriend!"

Rachael Ward, also known as The Girl, or The Girlfriend, is a side character appearing in Hotline Miami 2: Wrong Number. She is seen in the film Midnight Animal in a role analogous to Girlfriend's role in Hotline Miami.

In the film she is raped and abducted by the Pig Butcher and detained in his house, presumably based on how Jacket had carried Girlfriend back to his apartment in Decadence. She manages to escape and call the police, so the Pig Butcher is arrested. The Butcher manages to break free and kill a large number of policemen in the precinct on his way to the interrogation room where she is held. Upon finally entering this room he is abruptly shot by Rachael, who screams, "I'm not your fucking girlfriend!" without realizing that the gun was loaded with live cartridges until after the scene was cut.

She is last seen at the end of the game in her apartment besides a beer bottle lying on the floor, and soon gets incinerated by a nuclear explosion.

Rachael shackled to the bathtub in Final Cut. 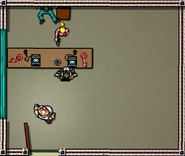 Rachael armed with a 9mm, about to kill the Pig Butcher.

Rachael in her home moments before her death. 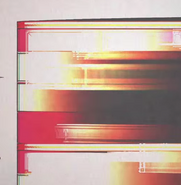