Dead (bludgeoned over the head

The Prison Boss is character and an antagonist featured in Hotline Miami 2: Wrong Number, where he is a minor boss character that appears in Act 5 Scene 4, Release. He is a 50 Blessings assassin in prison hired by the Janitors, tasked to kill Richter to tie up loose ends. However, he fails his mission in the ensuing riot, being killed by his target. Optional dialogue between a prison guard and Richter reveals that the guards were most likely bribed by the Janitors to force Richter to fight the inmate during lunch time, intending to have Richter killed in the process.

After threatening Richter he will begin walking towards him and occasionally begin charging similar to a charging inmate. Instead of using a punch to kill the player, he will do a Headbutt Execution if close enough.

After he charges at Richter twice, a cheering prisoner holding a Big Pipe will throw it into the court and this must be used to kill the Prison Boss and proceed to the next area.

The Prison Boss sports a shaved head and long beard tied up at the bottom, and wears his prison uniform tied around his waist like the fat Inmate. He also has the number 50 as a tattoo on his face, along with what appears to be the 50 Blessings mark on his neck.

This boss can be beaten by circling around him when he charges, as he doesn't turn as fast as you due to inertia. 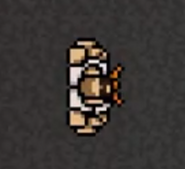 The Prison Boss in the yard 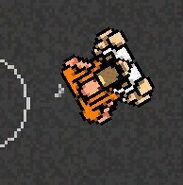 The Prison Boss grabs hold of Richter and headbutts him. 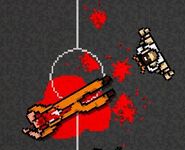