Assault
The Miami PD Police Chief is a character and enemy in Hotline Miami. He is a boss fought in the final section of Assault.

The Police Chief can be found in Chapter 13, Assault, on the top floor of the building.

The Chief dual wields MP5 submachine guns and will shoot at Jacket with high accuracy should the player get within sight.

Since the Chief is located in a closed off glass cubicle, he may only be killed by gunfire. A safe tactic for taking down the Chief is to lock aim on him while wielding a machine gun and shoot at him while passing the gap from cover to cover.

The Chief does not have much resistance and will die from one short burst. Similar to Thugs and Inspectors, he will eventually bleed out if he is hit by a single bullet and die. Since he is surrounded by 4 other police officers each armed with an M16 or shotgun of their own, it might be preferable to use a shotgun as it clears a wider area more reliably than an M16.

Notably, he has barricaded himself away from his men (much like the Producer), implying he may view them as relatively disposable.

In Hotline Miami 2: Wrong Number, he is replaced by a new police chief during 1991 after his death.

The Police Chief hiding away in his guarded cubicle.

The Police Chief aiming one of his MP5s. 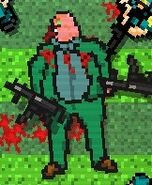