The Panther, also known as the Attack Panther or the Cat, is an enemy type that can be found only in Chapter 15, Showdown. In that chapter, Jacket must fight off two panthers at the same time using only a trophy. The panther is the only enemy in the game which can survive more than one melee hit from the player, other than Biker.

The panthers behave in a similar fashion to dogs but with a few key differences. Firstly, the panther will cautiously approach Jacket upon first sighting. Secondly, after a few moments the panther will perform a pounce move which can track from one side of the level to the other and will not stop until either the panther or Jacket is dead.

A single, dead panther appears in Hotline Miami 2 during the Hawaii sequences. This may imply it's a non-panther Cat native to Hawaii. Its head has been skinned by The Colonel to create his animal mask, the 50 Blessings logo carved into its forehead. Wearing it he gives his 50 Blessings foundation speech to his confused unit, before the blood causes it to slide off his face, leading him to awkwardly play the whole thing off as being drunk on top of shell shocked by warfare. 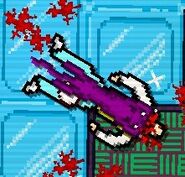 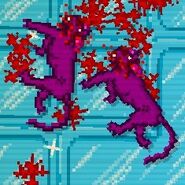 Both of The Father's panthers killed by Jacket.

A dead Panther seen in Casualties, its face been skinned off by The Colonel.