Push It
Neighbors is seventh chapter in Hotline Miami, occurring in May 23, 1989. It is the final chapter of Part Two: Questions. In this chapter Biker is introduced as a Boss. It takes place concurrently with Prank Call.

"It's 'Harry' from managment. We have a problem! There's big mess over by the Condos on 122nd SE St! One of the residents' water pipe burst, wet all over! The whole buliding is gonna be flooded soon... hope you can get this shit ASAP... Don't go easy on the mop!"

Note: The display address is South East 122nd Street, swapping the direction and the numbers. This is also true for the call later in the level. Other incongruent phone calls and display addresses appear in:

Neighbors is the first chapter to have Thugs as a common enemy. Thugs may only be defeated by gunfire and are immune to all knockdown attempts. The combination of gunfire only Thugs, fast attacking dogs and mobsters that rush to the location of gunshots can make this level rather difficult if one does not plan their attack beforehand. In preparation for the boss fight at the end of this level, masks Graham and Brandon are recommended. If one is assured of their ability to defeat Biker regardless of the mask, Tony or Ted are useful to remove the threat of dogs.

After cleaning the building, Jacket gets yet another phone call.

"There's been a small change of plans... We have a prank caller at the telephone company. Why don't you go there and see if you can... 'Talk some sense' with him. You know what I mean. 342nd NW St. Go there now! Floor it."

Note: The display address for the PhoneHom building in Prank Call is North West 342nd St., again the phone call numbers and directions in Neighbors are swapped. 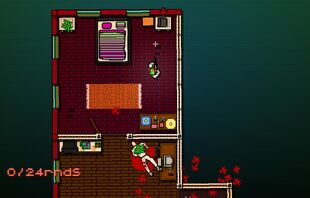 Place of the phone.

[After the phone call, Jacket arrives at the phone company, where he finds several murdered employees before encountering Biker in the main office.] 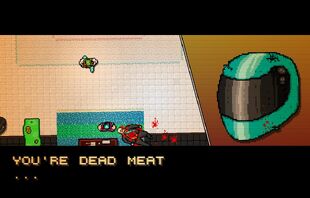 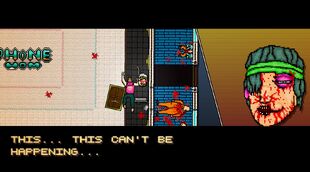 Biker is a very fast moving enemy that attempts to melee the player and occasionally throws their meat cleaver at the player. To defeat Biker, you must first pick up Golf Club from the bag at the bottom of the room. Biker may cut off your path to the bag so lure him around the room until you can grab the club safely. To win the fight you must avoid all Biker's attacks and strike him when he's busy with retrieving his thrown cleaver. Running around the edge of the room can be effective to avoiding Biker but you must take notice of how he is moving and adapt accordingly. If he looks like he will cut you off as you turn a corner, don't take the corner and move in a different direction. Keep doing this until you see a safe way out. If you are constantly moving you should avoid getting hit by the thrown cleaver. Once you have hit Biker for the second time, he will comment on how 'this can't be happening... i'm so close...' before Jacket apparently destroys his entire head with a club swing.

Welcome back, sir! ... How are you tonight? You don't look so happy. To be honest, I don't feel too good either. Something in the air... I don't know... I just have this really bad feeling. Like... Like something terrible has happened tonight. I haven't felt this way since San Francisco... I don't like it. Not one bit. So, how about a drink? It's on me.

1/8
Community content is available under CC-BY-SA unless otherwise noted.
Advertisement