"We can always grab pizza later if we don't find anything."

Mark, also known as The Bear, is a playable character in Hotline Miami 2: Wrong Number. He is a member of The Fans that wears a grizzly bear mask, and is the last Fan the player unlocks, becoming available upon completion of Execution. This also makes him the third-to-last playable character in the game.

He dual wields two MP5s and is the largest and most easygoing member of the Fans.

Mark is shown in the military bar on March 17th. He's sitting facing away from the bar and using the counter as an arm rest. He appears to be either hiccuping or laughing. He's holding a large red bottle and is seated between a seated, pizza-eating Corey and a standing beer-drinking Tony. Mark and Corey are the only ones in the group wearing sunglasses.

At the Halloween party, Mark is again seated drinking out of a large red bottle and using the back of a couch as an armrest. After Tony and Ash verbally express their hatred of the party, and Corey awkwardly pauses, Mark asks what they think about tonight. Both Ash and Tony agree to go out, and Mark asks if the weapons are in the car, but Corey expresses reservations and awkwardly pauses, leading Mark to also awkwardly pause. After the job, Mark retrieves and pays for several pizzas and brings them into the van.

On November 11th, Mark can be seen in Hank's bar again with his large red bottle, in a chair backed away from the table, seemingly for lack of leg room.

On November 22nd or shortly after, Mark helps execute the Russian Henchman by stomping on and crushing his right hand.

On December 2nd, Mark is inspecting an Uzi (of which there are now several on the Fans' 50 Blessing logo table, implying Mark brought in a new shipment of them) and sitting on a couch with Ash. Ash advertises a location his friend Jack gave him as being full of junkies and lowlives, to which Mark replies "Kinda like this place, huh? ...," eliciting a Fuck-you-Mark from Ash.

On December 9th, Mark is player-controlled and starts in the garage with Ash, who is tuning up the van. Mark goes inside and reads movie news on Galaxy Film's upcoming controversial picture. He joins the Fans in looking at floor plans of buildings on their table. He asks them if they caught Channel 6 last night and says "looks like we're famous now. ..." Alex missed the story, and asks Mark to call in to get a copy because she'd pay big bucks to see it. Tony sarcastically asks Mark to also call the police and turn himself in, to which Mark replies that wouldn't be very smart. Mark says the Fans will get another story eventually, but Tony disagrees, saying they'd need to kill more people first. After they settle on a location, Mark says he "wouldn't mind going for a ride" and that "we can always grab pizza later if we don't find anything." He goes to the van and Ash starts it from inside. Notably, Mark is unlocked on Into the Pit and the VHS art depicts him in the sewer. The mission has an uneasy atmosphere to parallel Mark's reservations and Level Clear fake out apparently to highlight Marks finite ammo supply.

On December 20th, Mark has a hallucination of himself happily delivering Richard masks to the Fans from the trunk of his grey blue sedan. The table is covered with both guns and empty pizza boxes. Corey, Tony, and Alex don the masks in the order of their floors and give their walkie talkie messages about meeting on the roof. Mark is confused, and the world flashes back to reveal the delivery wasn't real.

After the Swans enter the tower, Corey reminds Tony and Mark to keep in touch with walkie talkies and enters. Mark is given an unprecedented double ellipses to express his reservations about the roof plan, commenting that the gap between buildings looks too far to jump across. Tony comments that it isn't that far, but that "you might have some difficulties with it though, big guy," prompting the nervous Mark to say "fuck you too, man. ..."

Mark spends all of his ammo clearing his floor and radios that he's heading upstairs. Mark is then attacked and killed with a golf club by The Son. While Mark's death is only seen through the eyes of The Son while he is hallucinating, his corpse is found later by Detective Pardo with a wound to his head.

He has a full magazine of ammo for each gun in reserve. After his ammunition is depleted, he mounts his firearms on his back and reverts to using other weapons normally.

Without his machine guns, he plays similarly to the other "fat" characters, Martin Brown and Jake. His executions without a weapon have a long build up but are single hit kill.

Mark's playstyle features a "burnout" aspect with his abilities drastically limited after the opening volley of bullets runs out. This could parallel his lack of endurance due to an easy going life and largely pizza diet.

This is a compiled list of how many kills Mark has performed in the series. Kills in Bold are unclear and merely up to interpretation. This assumes Mark is chosen for all Fan missions:

Mark holding his weapons of choice 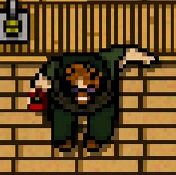 Mark in Hawaii
Community content is available under CC-BY-SA unless otherwise noted.
Advertisement