The lead pipe is frequently found in the hands of enemies such as Mobsters in the first Hotline Miami, Gangs and Colombians in Hotline Miami 2. The lead pipe and the golf club often get confused, as they are visually similar, and function almost exactly the same.

Similar to that of the golf club, it is a blunt melee weapon that swings at a moderate pace, making it faster and much more reliable than the baseball bat. It's execution involves the playable character bashing an enemy's head in three times.

While not as fast as a knife or a butterfly knife, the weapon has a longer range in relation to that of the baseball bat, which is another reason why the lead pipe is a more reliable weapon in comparison to the baseball bat.

The Henchman wielding the Lead Pipe.

The Son wielding the Lead Pipe. 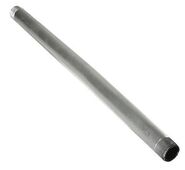