Green (with a viper-like vertical pupil)

His community assets can be found here.

Jake's corpse can be seen in Hotline Miami in Chapter 10, Hot & Heavy and the bonus chapter Exposed.

On April 25th, 1989 he is shaving himself bald in the bathroom of his filthy apartment, which features a Confederate flag blanket on his couch. He appears to have a green checkered shirt he's too big to fit into tied around his girth, to go with his snake mask. He walks by a 50 Blessings newsletter he's subscribed to out of patriotism. He answers his phone to hear "Eric from Miami Auto Repairs" asking him to pick up his recently serviced car (possibly planting the idea in Jake's head to get a new car). He seems to vaguely recognize the nature of the calls, and shouts to talk to their boss. He is ignored and given the address of a news station. After they hang up, he yells at them not to, telling them to "show some goddamn respect".

Afterward, he goes to a tattoo parlor to get a Dixie flag on his shoulder. He is given an appointment, to which he angrily replies that today is a special occasion (which it is, for Jacket, who starts taking jobs on the special occasion of April 3rd), calling the store owner a "Russian asshole" and leaving.

On June 3rd, 1989, depending on whether or not Jake took the money briefcase, Jake's apartment is either refurbished with a new pinball machine and a new monster truck waiting outside, or his apartment and car are both the same. He gets a call from "Mary from the Day Care Center," who invites him to a parent teacher meeting (both possibly paralleling how Jake has to have things explained to him) and gives him the address of a meth lab. He enthusiastically repeats the date back and yells "got it! I'll be there at seven!" to which the voice seems to pause in annoyance and finish its request to be discrete. They hang up, and Jake confusedly asks where they went, grunting in frustration.

He gets in his car and goes to the closing 50 Blessings' headquarters, where he pitches the idea of 50 Blessings' own phone calls back to 50 Blessings' Manager, who becomes annoyed and angry with him as he denies any knowledge of the phone calls. Jake finally gets that the phone callers and 50 Blessings are the same people, and, excitedly declaring he has a job to do, returns to his car.

He reaches the Russian meth lab (possibly also where the Russians develop their "new product") and clears out the first two floors. Upon reaching the third floor, he can either be wounded and brought to the bath house from Hot and Heavy, where he's interrogated and killed by Petrov and the VIP Guard (implied to be the actual case by Hot & Heavy and First Trial), or he can survive the mission and obediently follow the Manager in a Phone Hom van to a location where he has the option of either stealing a 50 Blessings floppy disk or not. He expresses excitement to the Manager about his ideas and working with 50 Blessings, and the Manager retrieves a gun, prompting Jake to ask if the police are onto them. The Manager then shoots him in the head.

If the second ending happens and the floppy disk was uncharacteristically stolen from 50 Blessings by Jake, Evan can find it on Jake's corpse in the evidence locker on November 27th, 1991. Evan leaves the police station and receives dream static, implying Jake surviving Withdrawal and Evan finding the floppy both part of a dream sequence.

On November 11, 1991, Jake can make a posthumous appearance in the Hank's bar easter egg. He is sitting alone with a miniature American flag he intermittently blows in an effort to make it wave.

Overall, Jake has a slow aiming speed and a stomping animation of average length (1.00 sec). He can wear three different snake masks, named Jake (his default starting mask), Irvin and Dallas (a cobra, a viper, and a black mamba, respectively) granting lethal throws, the Nail Gun weapon, and a killing punch ability, similar to Tony.

With the Jake Mask, the description of his ability literally means that any item that Jake can throw at an enemy will instantly kill them. This ability can come in handy a lot of the time, allowing Jake to use any weapon he comes across as a projectile against enemies (excluding dogs and thugs). It is also very useful when there are no guns around to pick up or whenever Jake runs out of ammo with a firearm, where he can then use said empty gun to use as a projectile. Each killing throw grants 400 points upon kill.

The Irvin Mask allows Jake to start off with a Nail Gun that Jake can drop or pick up at any time. The Nail Gun is loaded up with 20 "rounds" and is a silent weapon, where any shot won't alert enemies to Jake's presence. This can easily allow Jake to pick off a lot of enemies in an efficient stealth like fashion. However, the weapon itself is not very accurate and has a slow rate of fire. It essentially functions like a Silenced Heavy Pistol with extra ammo, but at the cost of less accuracy.

The Dallas Mask gives Jake the ability of killing punches, allowing him to also kill dogs and knock over thugs, which the latter can be finished off with a ground execution. The Dallas Mask also grants a special ability called "Havoc", where Jake swings nunchucks around that kill enemies that come into contact with them and increases his movement speed. The downside is that Jake cannot pick up any weapons. Also the special ability "Havoc" has a short startup and ending lag, which renders Jake vulnerable for enemy attacks.

This is a compiled list of how many kills Jake has performed in the series. Kills in Bold are kills determined by the player's choice:

Overall, Jake has killed 76 enemies (77 if you count the editor found at the end of Hard News).

Jake shaving his mullet as seen in the "Dial Tone" Trailer.

Suitcase of money at the end of Act I, Scene 3: Hard News

Jake's new car, a black truck. Appears only if Jake picks up the money in Act I, Scene 3, Hard News 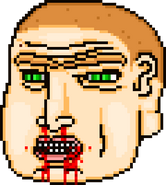