Shoot it, man! Shoot it in the head!

Inspectors only appear in Assault in the first game. They are a variant of the more common Thug enemies. The solitary difference from thugs is that when attacking the player, the inspector will deploy a Taser rather than simply battering them. Just like thugs, inspectors may only be killed by gunfire.

Inspectors are much more observant than thugs and will sometimes be able to find you after being alerted by gunfire, regardless of where you are in relation to where the shot was fired.

In Hotline Miami 2: Wrong Number, they function the same as in the first Hotline Miami, however they are now more common as they appear on two levels. This time, players can pick up their Tasers and use them as melee weapons once an inspector is killed. They appear in Final Cut and Caught.

Inspectors are large Caucasian men who wear green suits with white shirts underneath, they also wear a green hat that will fall off if they are killed, revealing them to be bald, like most enemies in the game are. Inspectors resemble the Briefcase Man somewhat, except they are fatter.

An Inspector in Assault.

An Inspector sat down in Final Cut.

An Inspector deploying a taser and incapacitating Martin Brown in Final Cut.

An Inspector deploying a taser and incapacitating Manny Pardo in Caught. 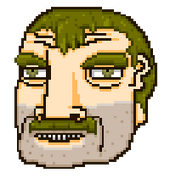 The Inspector face available in the Level Editor.
Add a photo to this gallery
Retrieved from "https://hotlinemiami.fandom.com/wiki/Inspector?oldid=39093"
Community content is available under CC-BY-SA unless otherwise noted.