Guards are an enemy faction in Hotline Miami 2: Wrong Number. They first appear both chronologically and level-wise in Release, where Richter attempts to break out of prison after a mass-prison riot occurs, presumably orchestrated by 50 Blessings.

The prison itself has a table of 50 Blessings pamphlets, and a group of three guards in the intro to Release are implied to have knowledge of the ensuing riot, implying they've been bribed by 50 Blessings and are on their payroll. Many of the guards may or may not be members of 50 Blessings themselves.

Guards are seen in prison, guarding and monitoring inmates and their cells at all times normally, and are also seen as security guards protecting the Colombian-occupied bank in Blood Money, where The Son and two of his fellow henchmen conduct a heist. They're seen fighting alongside Colombians in Blood Money, which implies the security firm guarding the bank is in their pocket, which adds up considering the Colombians own the bank. In both of their appearances, they're implied to be corrupt and brutal.

However, it is extremely unlikely that the guards seen in Release and Blood Money have any connection to each other, and are most likely separate groups. While they wear virtually identical uniforms, one group are correctional officers in a prison, while the other are security guards in a bank. While somewhat similar in nature, these two professions are also very different.

Guards are also present at the court where Jacket's trial is taking place in First Trial, alongside Police Officers. They are likely security guards hired to protect the court building, especially during high profile and controversial cases like Jacket's.

Enemy-wise, they function the same as Police Officers.

Guards are essentially recolored Police Officers in terms of appearance. They are shown to be wearing light olive shirts and dark brown trousers with dark olive caps. Golden logos appear to be imprinted on their shirts and caps, meant to represent their authority as either corrections officers or security guards, depending on the level and setting. 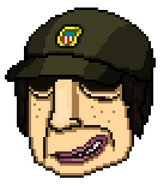 The dialogue sprite used for Guards.

Two Security Guards stationed at the entrance of court.

A single Security Guard in the court building, armed with a baton. 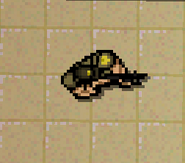 A Security Guard aiming a magnum. 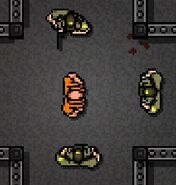 A fat Security Guard being beaten up by an Inmate.

The Son stomp-executes a Security Guard. 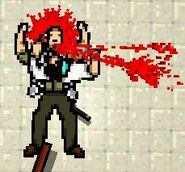 The Son performs his unique Butterfly Knife execution on a Security Guard.

The Son performs his unique Machete execution on a Security Guard.

The Son executing a Security Guard with a Katana.

The Son executes a Security Guard with a Baton.

Richter disguised as a Security Guard.