SEE YOU ON THE ROOF

Death Wish is the 12th Scene in Hotline Miami 2: Wrong Number and the last in The Fans' storyline. Coinciding with the final scene, Apocalypse, the level takes place on December 20, 1991.

Mark arrives with a new set of masks, all roosters. Corey, Tony and Alex each put a mask on and Mark asks them how they like these new ones. Instead, however, he is greeted by a hallucination in which Richard mimics the lines that would be said by Corey, Alex, and Tony later in the level. The scene is broken by a ringing phone, which Alex readily tries to answer, only to find out that the numerous stationary phones are silent. Ash then picks up the mobile phone, which he took from the Henchman in Execution. Ash answers, but doesn't speak, listening as the Son (unaware that the Henchman is dead and he is speaking to his killers instead) brags about the Russian Mafia's recent wave of success and discloses the location of the Mafia's hideout before realizing there is no one on the other end and hanging up. The Fans immediately head to the hideout, located on North West 20th Street.

After staking out the building, disabling the security lock and having a short conversation, the Fans excitedly rush in and spread to different floors.

After Alex and Ash make their way onto the roof, Ash tries to communicate with the others via walkie-talkie. However, nobody responds, and Alex suggests they should go down to check on them, to the agreement of her brother. Suddenly, The Son walks in from the staircase and immediately shoots Ash in the head, much to the shock of Alex. After a brief pause in which the Son laughs manically, Alex demands that The Son shoot her as well, which he complies with. The Son drops his gun and continues to walk to the edge of the roof.

Afterwards, Manny Pardo arrives on the scene which is already under SWAT's control. After a short exchange he ignores the SWAT Chief and enters a small room where Tony is hiding with the dead bodies of Corey and Mark. When Manny pulls his gun on Tony, the latter tries to surrender, but Manny shoots him in the head anyway. Later he lies to SWAT that Tony attempted to attack him, prompting the detective to shoot him in self-defense.

Richard: "All clear on my end, I think. Wait... what was that? I think I heard something!"

Mark: "What are you guys talking about?"

Mark's hallucination is suddenly interrupted by the ringing of a phone.

The view pans to Ash, who pulls the source of the ringing-- a cell phone-- out of his pocket.

Ash: "I took it from that guy we clocked at the bar... just charged it up this morning at Dean's place. What should I do? Do I answer?"

Ash answers the phone. The Son, thinking he is talking to the Henchman, reveals to Ash the location of the Russian Mob's hideout. See Phone Call below for the dialogue.

Ash: "Hey, guys! I think I just found us something to do tonight! Let's go right now. I'll tell you all about it in the van!"

The Fans are gathered outside the entrance to the building, as Ash is opening the lock to the entrance.

Corey: "Can you open the door already? It's getting pretty late... they might be heading out soon. [...]"

Ash: "It was your idea to stake the place out for two hours. I'm working as fast as I can here."

Corey: "Well, we couldn't just barge in. You gotta have a plan, you know. At least we know where they are."

Tony: "Just fucking open this thing, will ya?"

Ash successfully opens the door as him and Alex enter the building, Corey following after, while Tony and Mark briefly stay behind.

Alex: "Alright, see you guys on the roof!"

Corey: "Don't forget to stay in touch with the walkie talkies!"

Mark: "About the roof... you sure we'll be able to jump across to the other building? It looked a bit far to me."

Tony: "It's not that far. Well, at least not for the rest of us. [...] You may have some difficulties with it though, big guy."

The player then assumes control of Mark as he enters the building. After Mark clears his floor, he pulls out his walkie-talkie to notify the other Fans of his success.

The player then assumes control of Corey, who clears her floor next. Upon clearing her floor, Corey notifies the Fans of this as well.

Corey: "I think I'm done here. How are you guys doing? I'm moving up to the next floor. See you on the roof!"

Tony is then controlled by the player, who proceeds to clear his floor next. As with Mark and Corey, when clearing his floor, he notifies the other Fans.

Tony: "All clear on my end, I think. Wait... what was that? I think I just heard something!"

After a brief pause, The Son, in a manic state, stumbles out onto the roof, shooting Ash in the head as he encounters the twins.

The Son laughs manically as he aims his gun at Alex.

Alex: "What the fuck are you waiting fo-"

The Son then shoots Alex and walks off the rooftop.

Manny Pardo, under the control of the player, enters the building and talks to the SWAT chief.

SWAT Chief: "Hey, you're not supposed to be in here. We've got this under control."

Pardo: "Sure looks like it. I'll take over from here."

Ignoring the Chief, Pardo proceeds to walk into the room where Tony is hiding in. He encounters Tony mourning over Corey's corpse before holding him at gunpoint.

Pardo: "Well, what do we have here? Wearing masks, huh? Another set of vigilantes, I presume?"

Tony: "Don't shoot. I give up. I'm through with this. Just arrest me and get this over with, ok? I'm done fighting."

Pardo: "Oh, you want your fifteen minutes of fame? Well, I don't think so. [...] You know what happens to thugs like you?"

Having killed Tony, Pardo walks out of the room as a SWAT officer speaks to him on his way out.

SWAT officer: "Are you alright, sir? What happened in there?"

Pardo then walks out of the building, not before speaking to the SWAT chief one last time.

Pardo: "Looks like my job here is done. I'll leave the rest up to you."

Pardo finally exits the building and heads toward his car, passing by The Son's corpse on his way out.

The Son: "Hi, it's me! I know you wanted out, and I respect that, but... I just figured I'd give you a call and see if you've changed your mind.

"You wouldn't believe what's been going on the last few weeks. We're calling the shots now. Top of the game, no one can touch us.

"The new product is in full scale production! Got a new place! Three floors up on NW 20th St! Who would have thought, eh?

Mark shooting his way through a floor of the building

Corey roll dodging through a corridor

Alex and Ash clearing their floor

Alex and Ash face the Son on the roof 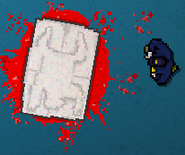 The Son's covered body outside the building.
Community content is available under CC-BY-SA unless otherwise noted.
Advertisement