I WAS BORN IN THE USA

Casualties is the 16th chapter of Hotline Miami 2: Wrong Number, and the last from Beard's storyline, being set on October 30th, 1985.

The cutscene begins with a discussion between the Beard's Unit: they are surprised by the forthcoming last mission and suspect that HQ wants them dead before their withdrawal. Suddenly the Colonel breaks in, completely drunk, wearing the face of a dead panther as a mask and shouting about the true bestial and violent nature of humanity (this speech is a reference to 50 Blessings, whose symbol is carved on the improvised mask and hints at the idea of masked killings).

The day after, in the morning, Beard is briefed by the Colonel, who confesses to him his frustrations about the war and his future in military bureaucracy, and tells him that he is quite sure that all of them will die in this mission.

The mission objective is to seize a power plant from Soviet control. The level is composed of 4 main sections.

After clearing all stages, Beard rejoins his squad at the main control room, discovering that the Soviet General in charge has killed all the technicians and sent the plant into meltdown before committing suicide.

The squad tries to escape, but Barnes is mortally wounded by a booby-trapped elevator, which also incapacitates Jacket. Daniels rushes over to stay with Barnes while Beard takes Jacket on his shoulder and escapes through the underground tunnels.

Outside the power plant the survivors (Beard and a wounded Jacket) are joined by an US army patrol. Beard calls for CASEVAC on the radio. To salute his friend, he gives him the Polaroid picture that Evan took in the intro of Ambush.

Half a year later, on April 3rd, 1986, Beard is at his convenience store in San Francisco, California. He is speaking on the phone with Jacket, comforting him for the loss of his girlfriend and asking for a copy of their Polaroid picture. He then hangs up, wanting to investigate a gathering of people in front of his shop. After he goes outside, he is obliterated by a nuclear detonation.

[The unit is sitting in their barracks, the Colonel's hut has a skinned panther laying on the American flag, it's blood and the stripes of the flag forming the 50 Blessings symbol.]

Barnes: Yeah. If they can't find another bullshit reason to get us killed.

Daniels: For once I agree with you, Barnes.

Barnes: Why are you always picking on me? We're in this shit together, right? As for tomorrow, I don't get it. I really don't. How the hell are the four of us gonna capture a power plant, huh? They should be sending in a whole platoon...

Beard: The place is likely booby trapped. Too risky for a whole platoon. ... I guess we're more... Expendable.

[A flash of light causes the Colonel to appear in a bloodied panther skin mask, the 50 Blessings logo engraved in its forehead. He raises his hands to the sky and begins to speak.]

Colonel: Do you see this? ... Can you see my face? This is my true nature! You see, don't you? This is who I am! This is who we all are. We're animals! ... There's no denying it! A bunch of goddamn animals! They're sending us out to slaughter or be slaughtered... And here we sit until they tell us what to do, and how to do it! No will of our own. Just mindless obedience! We don't even know why we're fighting now, do we? All we know is that deep down, somewhere in there, we enjoy it. Destruction and violence... It's just part of our nature.

Colonel: I... I may have had a bit too much to drink... I'm feeling a little bit tired. Maybe I better go to bed.

[The Colonel walks off, leaving behind the panther skin on the ground]

Barnes: I wonder what kind of fucked up shit he's been drinking.

[At dawn, Jacket is smoking by a cleaned-up Colonel's hut. Barnes and Daniels are armed and talking by the log chairs and campfire. The Colonel is armed with a Big & Heavy.]

Beard: A bit much to drink yesterday?

Colonel: That's got nothing to do with it, unfortunately. ... I've got word that they're sending you boys home tomorrow... Lord knows whether they're lying or not. But that's not the issue. I'm afraid this might be your last mission, son... And that they'll be sending you home in body bags. ... You've seen the plans, so you should know. You'll be walking right into a trap. And there's little I can do about it. I've already said this to the others, and I'll say it to you too. It's been damn good commanding this squad, Lieutenant! We may not win this war, but I couldn't be more proud of you boys.

[Beard takes his weapon and leaves.]

[After clearing the Level, Beard finds Jacket looking into the control room, Barnes picking the lock to the room, and Daniels with his gun slung over his shoulder.]

[The Russian general has killed six technicians, he finally kills himself in his chair at a central terminal.]

Barnes: No point going in there now, is there?

[The plant rumbles and an alarm goes off.]

Beard: Guys, I think we better get out of here...

[After Beard carries Jacket to safety]

Radio: Can you repeat that? Over!

[Beard finishes radioing and turns to Jacket on the ground.]

Beard: Hang in there, buddy. They'll be here real soon.

[Jacket extends out his hand.]

Beard: No need to thank me, kid. It's on the house. You would have done the same for me, right? ... I think I hear the chopper coming now...

Beard: Maybe you should take this, so you don't forget who saved your ass.

[Beard is on the phone with Jacket in his convenience store]

Beard: Sorry to hear about that. Things like that are never easy. ... Well, yeah. ... You know what they say. Time heals all wounds. ... Right. So, you remember that photo we talked about, from Hawaii? Did you ever get around to sending me a copy of it? ... Right, well whenever you get a chance, man. Look, there seems to be something going on outside my shop. I'm gonna go have look, okay? ... Alright, talk to you later. Bye!

[Beard steps out of his store and is killed in an Atomic blast.]

A dead Panther seen in the intro, skinned by the Colonel. Note the 50 Blessings logo drawn over the American Flag with the Panther's blood. 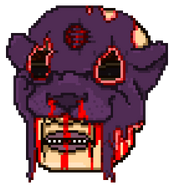 The Colonel wearing the dead Panther's face over his head as a mask, his purple eyes appearing to glow from the lidless holes.

The Colonel seen with a Heavy Machine Gun before Beard starts his mission. 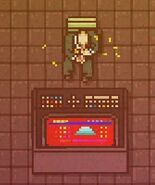 The Russian General moments before shooting himself in the head. 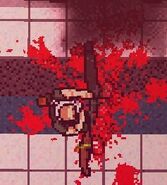 Daniels stays with a blown in half and dying Barnes.

Beard and a wounded Jacket escape the Power Plant.

Jacket being tended by US Military Medics. 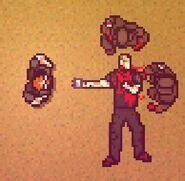