Carl is an unlockable mask in Hotline Miami. The mask is of a locust and wearing it grants Jacket a drill at the start of the chapter. This mask is the only legitimate way to obtain the drill.

Carl can be found in Chapter 8, Push It, on a dead body in the centermost room of the ground floor.

Carl's dead body in Push It. 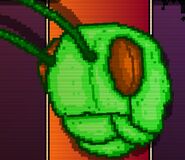