He gets the first lines of dialogue in the series during Hotline Miami's tutorial. He teaches the player the combat mechanics of the game, and is very rude and hasty with Jacket. Given that he was one of Jacket's first murder victims and how he vomits after killing Bum, it is possible that this is a manifestation of Jacket's guilt from killing the Bum in his conscience during his coma dream in the first half of the game, where Jacket relives the events of his life, up until Richter's murder of his girlfriend and attempted murder of Jacket.

He is encountered first as the narrator for the game's tutorial and then as an enemy at the end of Metro. Once Jacket has dropped off the briefcase in the dumpster, Bum will stand at the entrance of the alleyway with a baseball bat. Jacket must bash Bum's head in to advance, prompting him to remove his mask and vomit.

Bum reappears as a posthumous cameo appearance in the Bar of Broken Heroes in Hotline Miami 2: Wrong Number, where he is seen rummaging through dumpster outside the bar. He cannot be interacted with by Evan.

It has been speculated and is likely that the Bum is one of the only murders Jacket has committed that he regrets. This is supported by the fact that Jacket vomits shortly after killing the bum, most likely due to the sight and smell as well as his emotions, and the nature of the crime itself. Unlike Jacket's other murders, his killing of the hobo was not premeditated, as he was ambushed by him in an alleyway. Jacket therefore killed the Bum in self defense and given that he is unaffiliated with the Russian Mafia and 50 Blessings, it is very likely Jacket did not actually want to kill the Bum but felt he was given no other option upon being attacked by him for entering the alleyway he occupied.

It is also worth mentioning that Jacket's murder of the Bum occurred shortly after his first murders at the subway station in The Metro, which means that Jacket was likely not yet used to committing killings outside of an active war zone, such as when he was in the Soviet-American war in Hawaii. 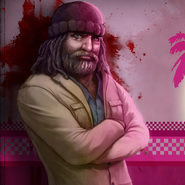 Bum glitching outside of the map where he is fought.

Bum as he appears in The Bar of Broken Heroes.
Add a photo to this gallery
Retrieved from "https://hotlinemiami.fandom.com/wiki/Bum?oldid=40694"
Community content is available under CC-BY-SA unless otherwise noted.