Yes
The briefcase is a unique weapon in Hotline Miami and the primary object of the prelude chapter, The Metro. At the start of the chapter, Jacket is instructed by 50 Blessings to discreetly throw the briefcase in a dumpster. The player never learns about the contents.

As a weapon, it has a very short range and moderate swing speed. Similar to the drill, the briefcase can only knock down enemies, this means the player must execute every enemy when using the briefcase. The briefcase has a unique execution move where Jacket bashes a downed enemy's head in with the briefcase.

The briefcase is only available at the end of The Metro, after killing a man wearing a long coat on the second floor of the metro station. 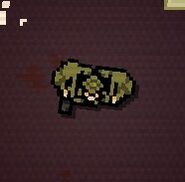 The location of the Briefcase. 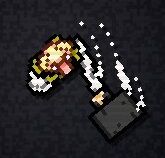 Jacket executing a Mobster with the Briefcase.
Add a photo to this gallery
Retrieved from "https://hotlinemiami.fandom.com/wiki/Briefcase?oldid=41260"
Community content is available under CC-BY-SA unless otherwise noted.