The Baton, referred to in the game files as the Stick, is a melee weapon that appears in both Hotline Miami and Hotline Miami 2: Wrong Number.

The Baton can only be found on Chapter 13, Assault, as almost all enemies in that chapter, except the Police Chief mini-boss and Inspectors, are police officers and many of them carry batons. The baton functions similarly to the knife, but has its own execution animation.

The Baton returns in Hotline Miami 2: Wrong Number and is much more common. This time, it can be found in the hands of the Police, Guard or Prisoner enemy factions, and as such only appear in levels that feature them.

Richter wielding a Baton in his prison uniform.

Richter wielding a Baton while disguised as a Security Guard

The Son wielding a Baton.

The Son executes a Security Guard with a Baton. 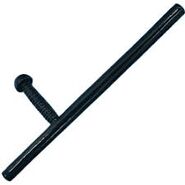 A Real Life Police Baton (Tonfa) image.
Add a photo to this gallery

Retrieved from "https://hotlinemiami.fandom.com/wiki/Baton?oldid=40154"
Community content is available under CC-BY-SA unless otherwise noted.