GOTTA GET A GRIP 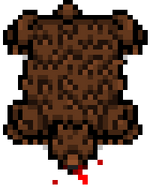 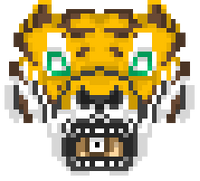 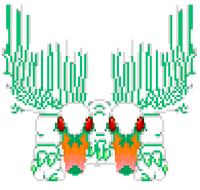 Apocalypse is the final Scene from The Son's storyline, the 25th and final scene of Hotline Miami 2: Wrong Number, and the final level of the Hotline Miami series. The scene coincides with the events of Death Wish, taking place on December 20, 1991.

The scene begins with The Son attempting to invite The Henchman over while Russian Mobsters hang out and play arcade games. When nobody responds, he throws the phone away, and takes some of the Mafia's new drugs. After taking two handfuls, Blue Lips advises him not to take too much. After taking another two handfuls, he starts to experience time slips and hallucinations and the Mobsters disappear.

The Son goes to turn on a nearby sink, only for it to overflow in what seems like an instant. A Mobster appears in the room and starts gesticulating nervously, likely trying to explain the situation. Another flash gives the Son a nearly-emptied shotgun, the media equipment in the room being wrecked and the Mobster being replaced by a blood trail out of the room. The Son follows the trail to find another Mobster leaning over the bleeding one, apparently either giving him CPR or eating him. The mobster then points at the Son as his head becomes engulfed with flames.

After killing several Flame-headed Mobsters and a Tri-headed dog, The Son enters a room with a Bear in it. The Bear roars and charges, and the Son quickly grabs a golf club and delivers a fatal blow to the creature's head. The Son then leaves the room, and is approached by one of his men giving him a Shotgun. This results in the Mobster getting shot and slithering away into a small room with Mobsters and bags of money in it, reenacting the opening to Blood Money. As the group drinks vodka shots, the scene cuts to them all dead, with the ammo counter for the shotgun down by a corresponding number of rounds. The Son shouts "Gotta get a grip!" before his facial sprite consumes the money and him.

The Son is then transported to a small glass room with a Magnum in it. A whinny shatters the windows, and a Zebra rushes into the room to trample the Son. He shoots the Zebra, which explodes into blood and a Miami Dolphins jacket. The black void around the room is then filled with the office space, the room itself containing several dead Mobsters and a Zebra mask.

The Son exits the area to a jungle-overtaken office space with an enlarged weapons case on one counter and a shotgun on the floor. He kills several gelatinous cloud creatures and tri-headed dogs before the shotgun evaporates in his hands. In a long hallway he stumbles upon another shotgun on a pile of dead Mobsters and picks it up. Continuing he encounters several skeletons near a cloud of darkness. A giant Tiger with an eye in its mouth peaks out, roaring. The Son backs away, causing it to charge. As he fires the Tiger disappears in a shower of colorful sparks.

The Son continues over the ripped-apart and writhing corpses of several Mobsters. He proceeds the roof with a fire axe in his hands. He sees two angelic statues glide over him and fuse into a huge two-headed swan monster over the helicopter pad. One head charges him attempting to bite him in half, while the other strafes while shooting fire from its mouth. He axes in both heads, causing the necks and body of the monster to explode into blood and iridescent colors.

After killing the swan monster, the Son walks to the edge of the roof. White birds surround a golden gate bookended by the angelic statues, a rainbow bridge extending infinitely behind. As he approaches, the gates open for him. He steps through and onto the bridge (falling to his death in reality), disappearing into the rainbow void as it engulfs the screen and the credits roll.

After the first round of credits, the scene cuts to December 28, 1991. Richter and his mother are in Hawaii watching a TV interview (featuring either Martin or Evan, depending on the choice made earlier) which is interrupted by an emergency broadcast stating that the presidents of the United States and Russia have been killed by a group of armed men led by a U.S. Army General, experts expecting this to be seen as an act of war.

Richard appears and he and Richter agree that good times never last. Richter briefly wonders if anyone's onto him, but slowly realizes that the situation's much worse than that. He wonders how much time he has, to which Richard replies that no one in general ever has much time. Richter realizes there's no reason to fight, that leaving the world isn't as scary as it sounds, and is obliterated by a nuclear detonation.

As the nukes fall, the final moments of Manny Pardo (barricaded alone in his apartment, drunk and pointing his revolver at his front door), Evan (either typing alone or eating reunited with his whole family), Midnight Animal actress Rachael Ward (drinking alone in her apartment), and Jacket (playing with a green stress ball in a sparse jail cell) are depicted, each carrying out their lives as normal, oblivious as they're wiped away.

[The son hangs up and begins taking pills.]

Before fighting the Zebra[]

[The Son is inhaled into the Zebra room by his own dialogue portrait.]

[After the first round of credits, the scene changes to Richter and Rosa watching TV in a house in Hawaii. Depending on the choice the player made during the outro of Release, the show features either Martin Brown or Evan Wright as a guest.]

Martin version (If Evan decided to reconcile with his family)[]

TV Host: I'd like to introduce our next guest on the show. Famous from critically acclaimed films such as: 'Blue Ocean', 'The Calm', and 'Land of Tree-

Evan version (If Evan continued working on his book)[]

TV Host: So, Evan, what's your opinion? Do you think there's any truth to his claims of a conspiracy?

Evan: I couldn't find any substantial proof of a conspiracy, but my research strongly indicates that there might have been one. Hopefully my book will get people to start asking questions. Perhaps a more thorough investigation could be conducted on the future.

TV Host: You're implying that the official investigation wasn't thorough?

Evan: From the police reports I've seen the investigation was a complete mess. A lot of stones were left unturned, so many questions left unsanswered. I really hope we'll get to the bottom of the whole incident one day.

TV Host: And when can we expect to read this book of y-

[In both cases, the show is interrupted by an emergency message. From this point on, the ending's dialogue is always the same.]

TV: *TZZZT* [...] We are interrupting the program for an emergency broadcast. The president of the United States has been assassinated. A press conference in Washington was interrupted by a league of armed men. During what appears to be a coup d'état the president was shot and killed. The Russian president was also shot dead in the chaos that ensued. The ring leader of the uprising appears to be a U.S. Army General. At this time, no official statements have been made. *TZZZT* Experts believe this will be seen as an act of war against Russia. They fear the repercussions may be severe. Stay tuned as we will be reporting live fro-

[Rosa reaches into her purse, takes a Richard mask and puts it on, turning into Richard.]

Richard: Looks like you've gotten yourself quite comfortable over here. You know what they say about good times, don't you?

Richard: That's right. Soon this will all be over.

Richter: I had a feeling things would catch up with me. [...] Are they onto me?

Richter: How long do I have?

Richard: You? You don't have much time. No one does.

Richter: There's nothing I can do about it, right?

Richard: No. By now there's nothing anyone can do about it.

Richter: Okay. No need to fight it then.

Richard: I'm glad you understand. [...] Leaving this world is not as scary as it sounds.

[A nuclear bomb detonates in Hawaii, killing Richter and Rosa among countless others as the ending song begins to play]

During the Intro, the song is "Interlude", by Chromacle.

During gameplay, the song is "Fahkeet", by Light Club.

During the level's ending and the first round of credits, the song is "Dust", by M.O.O.N.

During the outro, the initial song is "Around" by Modulogeek. After the broadcast is interrupted, the music changes to "Videodrome" by Dennaton. When Richard appears and starts talking, the music stops entirely.

During the ending credits, the song is "You Are The Blood" by Castanets. 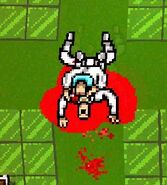 A hallucination of a Russian Mobster cannibalizing one of his own men. 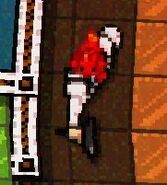 A Demon Mobster (hallucination as a result of the Pills) armed with an Uzi. 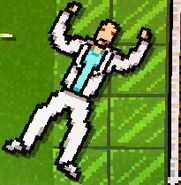 A Demon Mobster after being knocked over (note the red eyes).

A Demon Dog with three heads (hallucination as a result of the Pills).

The hallucinated form of Mark eating the corpse of a mobster. 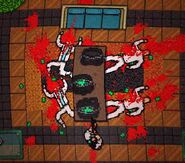 The Son shoots and kills his own men.

The Son is inhaled by his own contorted and exaggerated dialogue-sprite.

The hallucinated form of Corey leaping across the room. 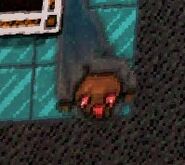 A Demon Thug (hallucination as a result of the Pills). 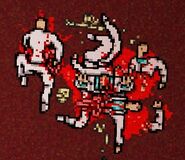 The hallucinated form of Tony emerges from the shadows.

Tony explodes into a large ray of light.

A Mobster writhing and wriggling on the floor, his guts slowly warping and morphing in and out of his body.

The hallucinated forms of Alex and Ash right before merging together. 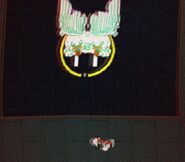 The gigantic beast form of Alex and Ash.

The deaths of Alex and Ash. 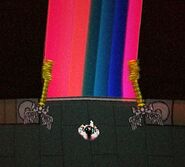 The Rainbow Bridge to Valhalla.

The Son walks across the Rainbow Bridge to Valhalla. In reality however, he has walked off of the roof of his HQ and falls to his death.

The Son's showdown with The Tiger.