The Car is Jacket's main trainsportation device in the game. After every phone call, Jacket uses it to drive to his destination. Every main chapter (except Chapter 12, Trauma, and the Final Chapter, Showdown) ends with Jacket driving home to his apartment building.

After Trauma, the car has been vandalized and will remain in that state for the duration of the game. It has 4 broken windows, 3 broken lights, various dents and the door on the driver side is missing. Also, on the hood of the car the word 'WHORE' is written in graffiti. This could be a jab at Jacket's dead girlfriend.

The Acado GT is a placeable vehicle in the Level Editor, and appears in The Henchman's Level No Mercy in a black paint scheme.

Since Jacket has made his return in Hotline Miami 2: Wrong Number in the Level Editor, the Acado GT also returns as his method of transportation. 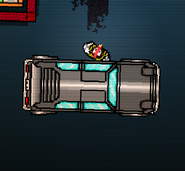 Add a photo to this gallery

Retrieved from "https://hotlinemiami.fandom.com/wiki/Acado_GT?oldid=37693"
Community content is available under CC-BY-SA unless otherwise noted.